The Inversnaid Hotel is situated in one of the most beautiful parts of Scotland, tucked away on the north eastern banks of Loch Lomond. This secluded hotel was once a hunting lodge for the Duke of Montrose and is steeped in local Scottish history, from clan warfare to the clearances. Inversnaid also offers spectacular views of Arklet falls, the muse of Wordsworth and Sir Walter Scott, with un-spoiled surroundings and peaceful tranquillity.

The unique location of the Inversnaid Hotel makes for an adventurous stay and guests are often ferried to the more populated Western shore of Loch Lomond.

The Inversnaid Hotel offers comfortable bedrooms, all with an en-suite bathroom and a choice of bath or walk-in shower, as well as flat screen TV’s, hairdryer and tea making facilities. 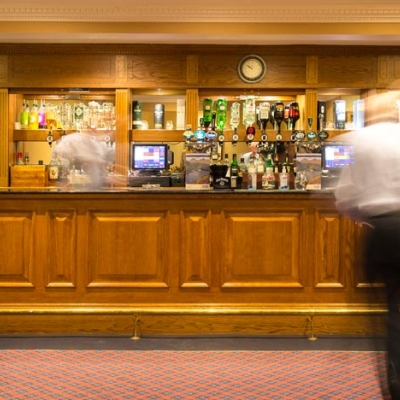 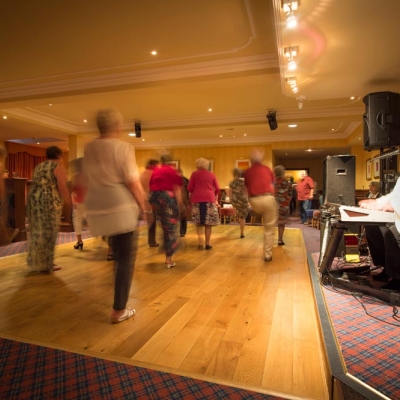 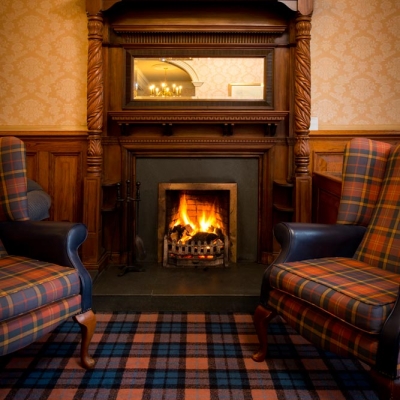 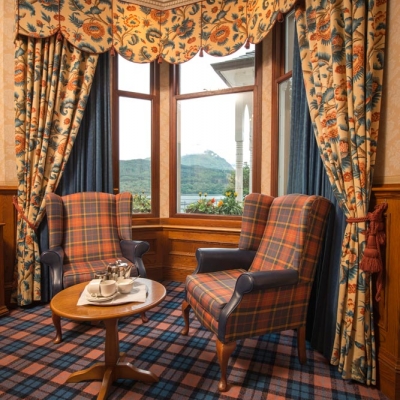 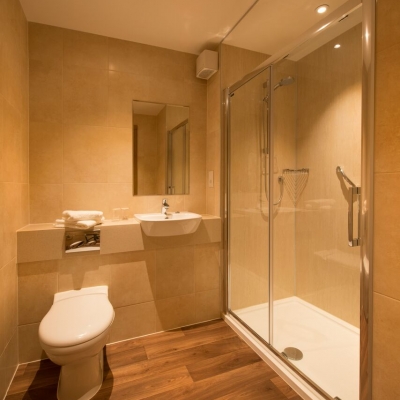 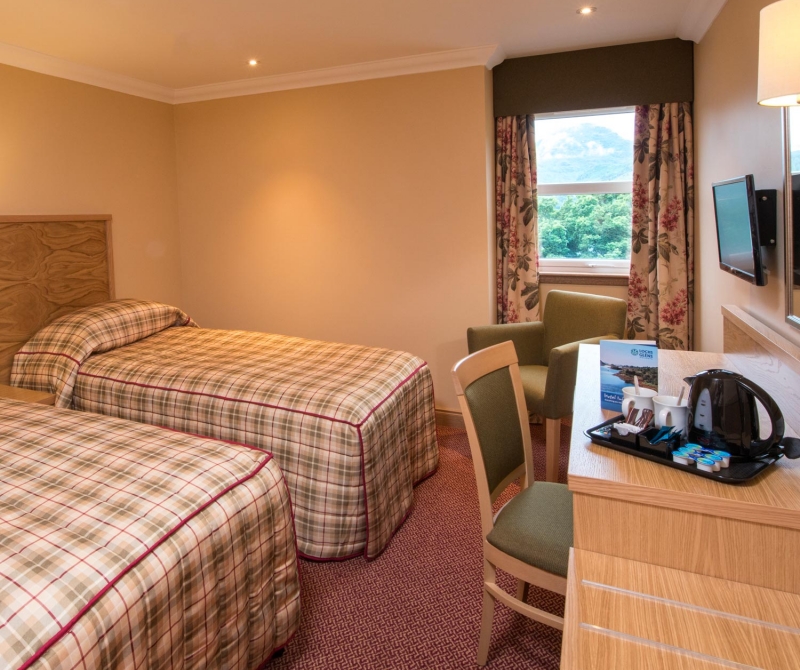 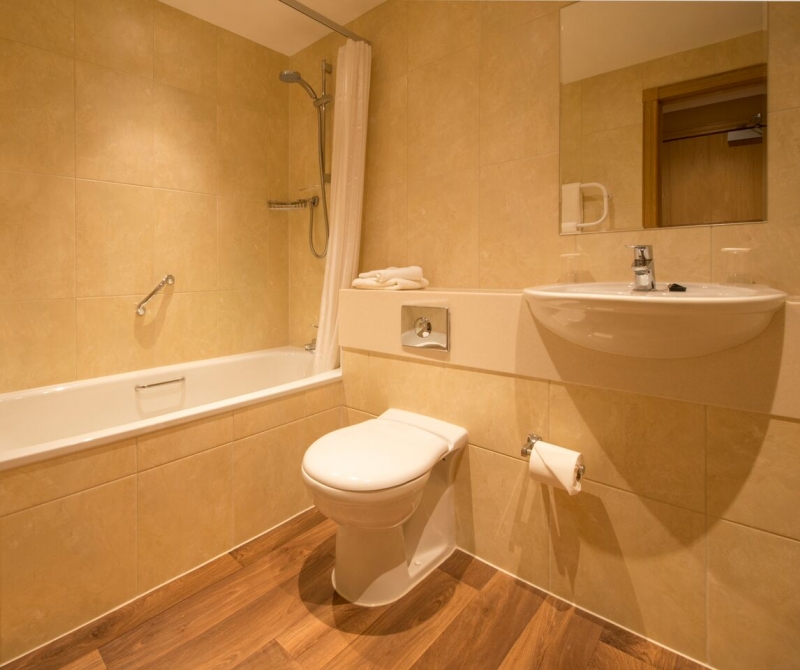 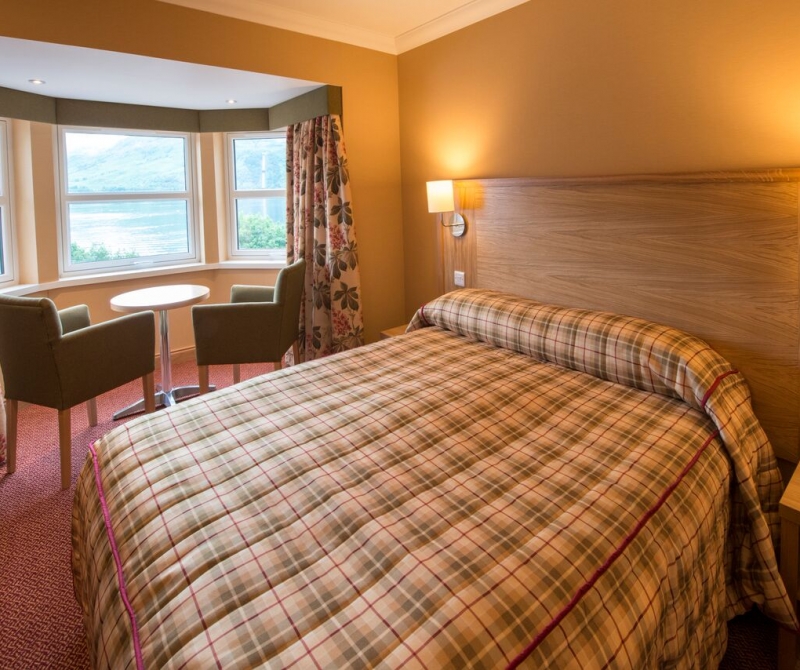 Walks near The Inversnaid Hotel

Inversnaid lies in the heart of the Loch Lomond and the Trossachs National Park on the bonnie banks of Loch Lomond. The Hotel sits between beautiful Arklet Falls and the notorious Rob Roy’s Cave. There are many walks surrounding the Inversnaid of various lengths and difficulty. The West Highland Way footpath, which stretches from Glasgow to Fort William, passes the doorstep and the RSPB nature conservation is just a few metres from the hotel.

The West Highland Way (Britain’s longest footpath) runs along the eastern shore of Loch Lomond and is easily accessed. Head north to explore Rob Roy’s cave or turn south towards Cailness cottage and ramble through oak woodlands and wild flowers. 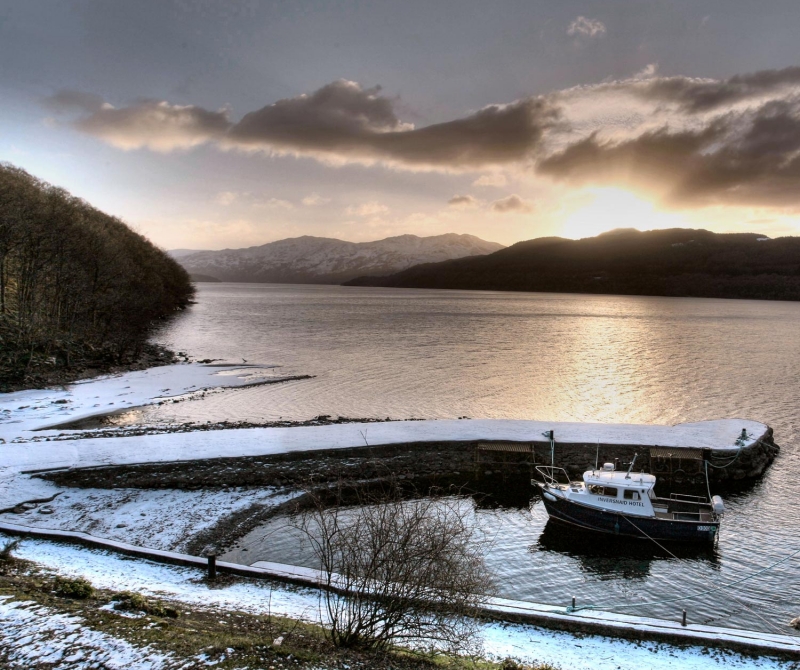 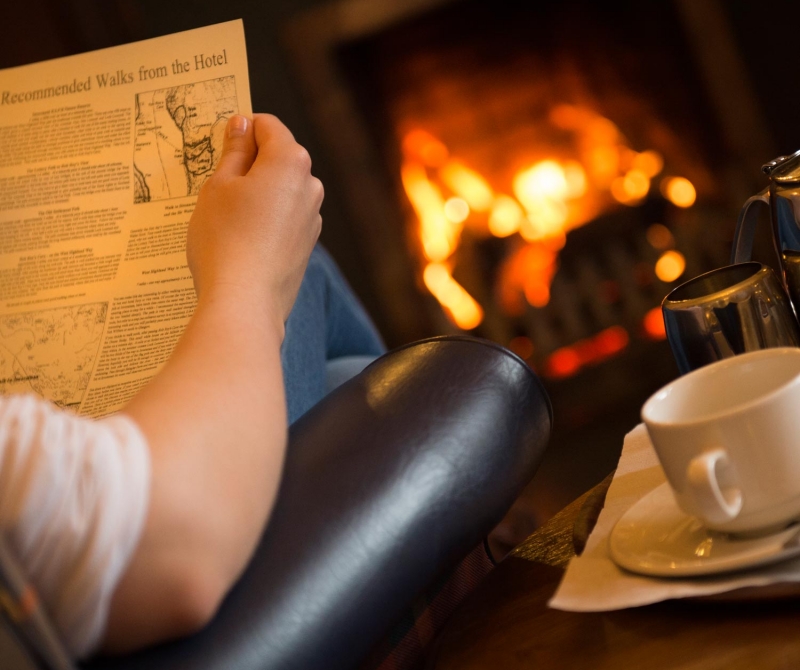 The RSPB nature trail is a short but steep 2.2km walk and circulates the protected woodland. Inversnaid is home to a wide range of wildlife; including the rare feral goats which populate the hillside. There are a variety of rare birds in the area including black grouse, pied flycatcher, redstart, twite, wood warbler, red kite and ospreys. 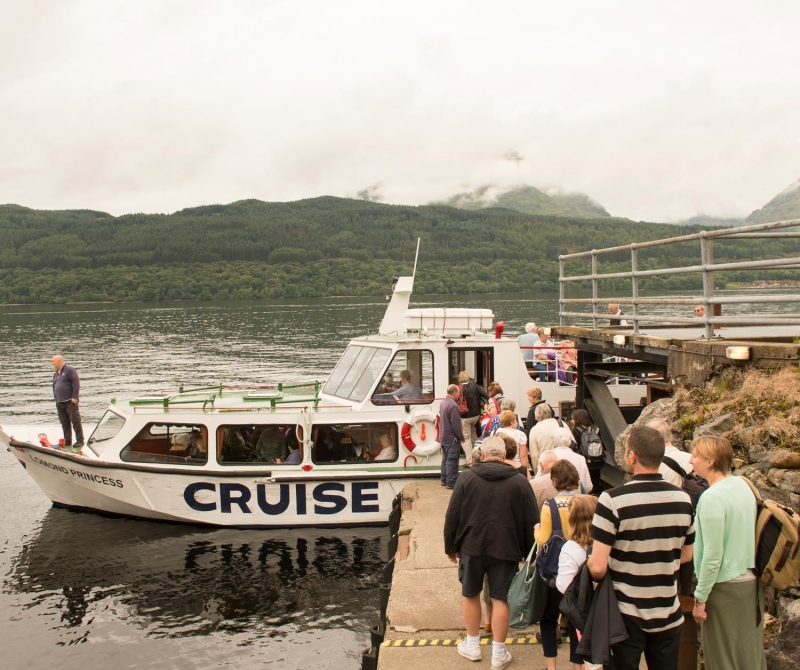 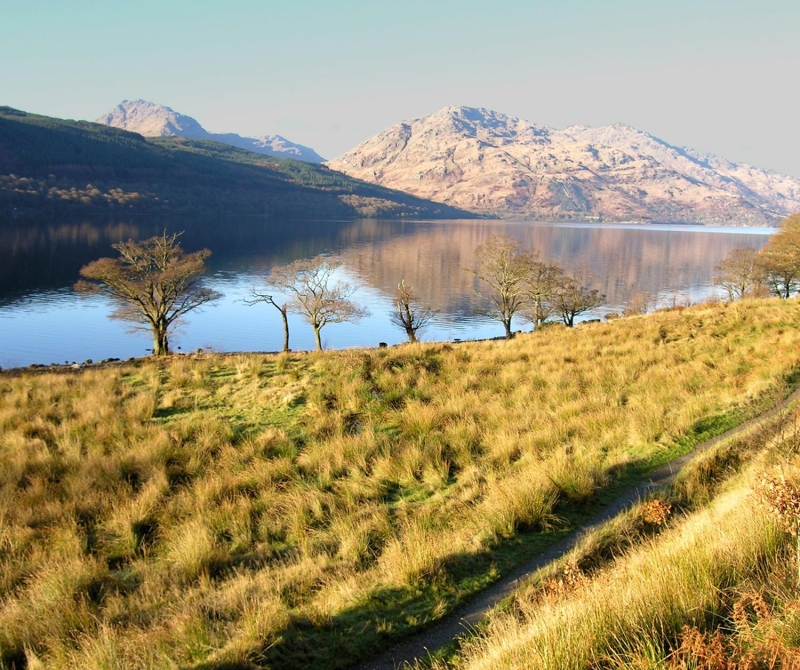 The History of The Inversnaid Hotel

The Inversnaid Hotel and its surroundings have a dramatically varied history. The current building was commissioned by the Duke of Montrose in 1820 and was originally used as a hunting lodge but tourism was booming in the area and the lodge was soon converted into a hotel. In the second half of the nineteenth century there was a considerable upsurge in tourism and travelling with the arrival of the steam train and paddle steamer. The Inversnaid Hotel was ideally located for this type of travel and the hotel quickly became a popular staging post on the round trip from Glasgow – Glasgow to Balloch by train, Balloch to Inversnaid by steamer, Inversnaid to Stronachlachar by horse and coach, Stronachlachar to the Trossachs by steamer, the Trossachs to Aberfoyle by horse and coach and finally on to Glasgow by train. As well as this tour there were regular steamer services running on Loch Lomond with as many as 5 stops a day at the Inversnaid.

During the 19th century and the early 20th century Inversnaid was booming and employed a large staff force. However, as technology changed during the inter-war years the horse and coach were rapidly being replaced by the motor car steamers were eventually abandoned. The hotel itself has seen many changes over the past two centuries and Lochs and Glens Holidays have continued to modernise and improve the hotel over the past 30 years. 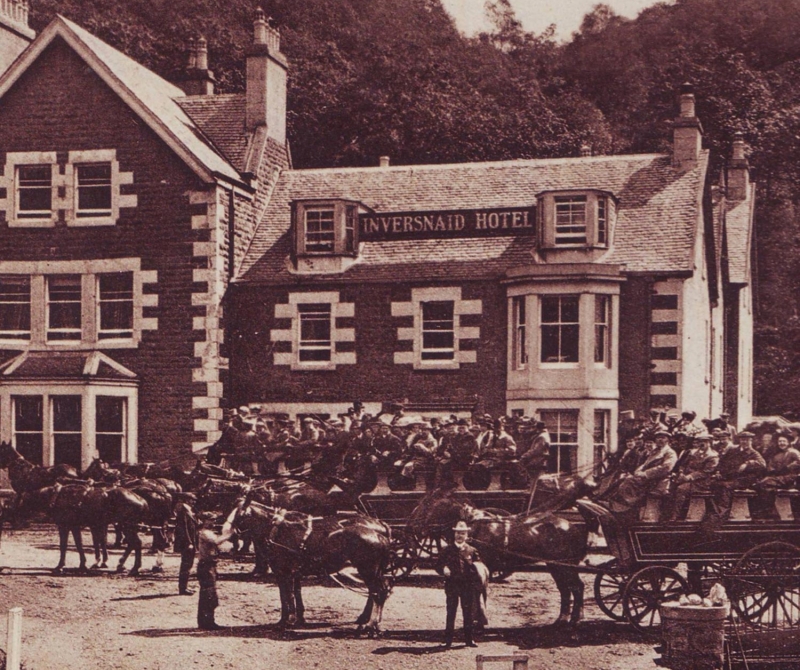 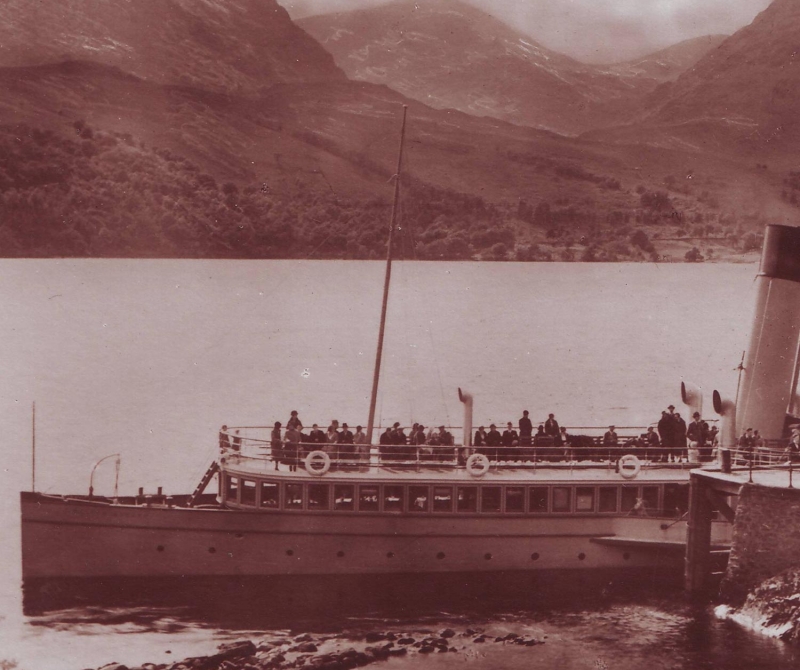 Inversnaid is also a historically important location and has hosted clan warfare, Jacobite rebels and highland clearances. The most famous local was undoubtedly Rob Roy MacGregor, cattle reiver and outlaw. Robert MacGregor was born in nearby Glengyle in 1671 and grew up during a time of relative peace. As the son of the chief of Clan Gregor he helped his father and two brothers to farm land and look after cattle. In those days Highland cattle were very much the lifeblood of Scotland and Rob Roy soon became a respected cattleman. Not only was he an expert in buying, selling and droving to market, but he was also a cattle reiver. Reiving was common amongst the clans but Highland code excluded cattle when it came to theft because they were regarded as communal property.

In 1693 Rob Roy married Mary MacGregor of Comer and the couple set up home at Inversnaid. It was here that they established a droving business but it was cattle that brought about Rob Roy’s downfall. In 1712 he borrowed £1,000 to buy more stock and he gave this money to his chief drover, a MacDonald. Unfortunately for Rob Roy, MacDonald absconded with the money and as a result MacGregor was branded as an outlaw. Shortly afterwards his wife and family were evicted and their home burnt to the ground. Legend has it that it was then the family took refuge in the famous ‘Rob Roy’s Cave’, just along the shore from the hotel. Thereafter Rob Roy resolved to take revenge on his enemies, in particular the Duke of Montrose who was at the forefront of this persecution. For many years thetwo were at odds with one another and during this period there were many stories of Rob Roy’s daring escapades.

In 1715 Rob Roy took part in the first Jacobite rebellion, which culminated in the Battle of Sheriffmuir near Stirling. Following on from this uprising the government forces built the garrison at Inversnaid but it was only after the garrison was complete in 1718 that all pursuit of Rob Roy were called off.

MacGregor then settled down with his family in Balquhidder Glen and lived out the rest of his life in comparable peace. Rob Roy died in his bed at Inverlochlarig on December 29th 1734 and was buried close by in Balquidder. He lived to a ripe age of 63, which in the days of clan warfare and Jacobite rebellion was quite an achievement. The name Rob Roy MacGregor is still legendary today and is very much a part of Inversnaid and Loch Lomond. Sir Walter Scott immortalised him in his literature and the movie ‘Rob Roy’, starring Liam Neeson, ensures that his name is not forgotten. 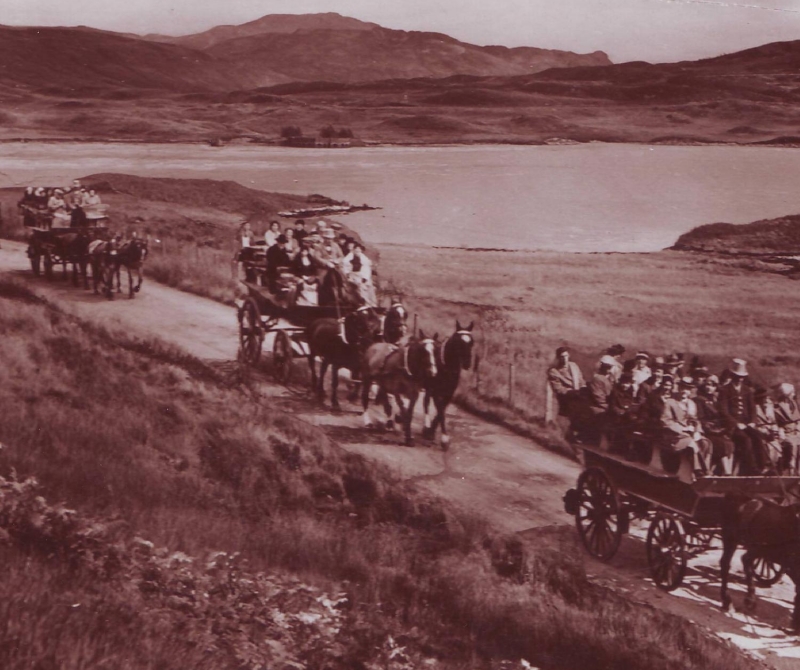 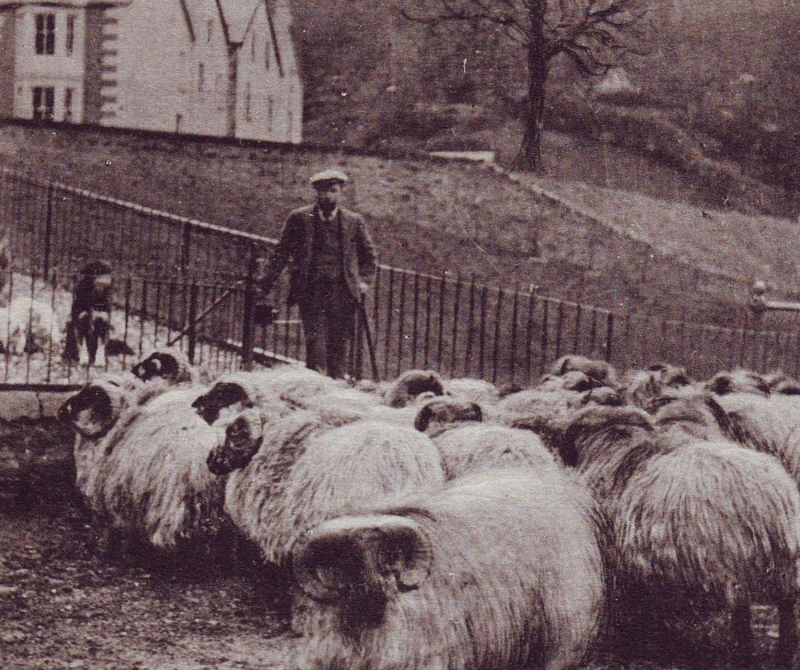 Following on from the Jacobite rebellion of 1715 the Hanoverian government decided to build a garrison at Inversnaid as part of its plan to control the Highlands. The site agreed upon commanded the pass between Loch Lomond and Loch Katrine. It also overlooked Arklet Water and Snaid Burn so was of considerable strategic importance. Work began in spring 1718 but the garrison was not completed until the autumn of 1719.

The Jacobites were a considerable force in Scotland throughout the early eighteenth century and so the garrison was quite a substantial stronghold, comprising of two barrack blocks 3 stories high. During the second Jacobite rebellion, 1745, the garrison was partially destroyed by Rob Roy MacGregor’s eldest son, James MacGregor. Plans were made to re-build the garrison but were never carried out and today’s remains date back to 1718 and 1719. The north wall is all that remains of this stronghold and most of the site is occupied by farm buildings, some of which incorporate the original structure.

Throughout the centuries Inversnaid has had some very famous visitors, including William Wordsworth who was inspired to write his poem ‘To a Highland Girl. At Inversneyde upon Loch Lomond’ about a bonnie highland lassie he had taken a fancy to. Sir Walter Scott visited Invernsaid earlier in 1792, no doubt researching for his novel ‘Rob Roy’. It was also Scott who named Loch Lomond as ‘The Queen of the Scottish Lakes’. Queen Victorian was a frequent visitor to the area on her regular tours of Scotland. The American writer Nathaniel Hawthorne and Gerard Manley Hopkins were also inspired by the beauty of Inversnaid in their works.