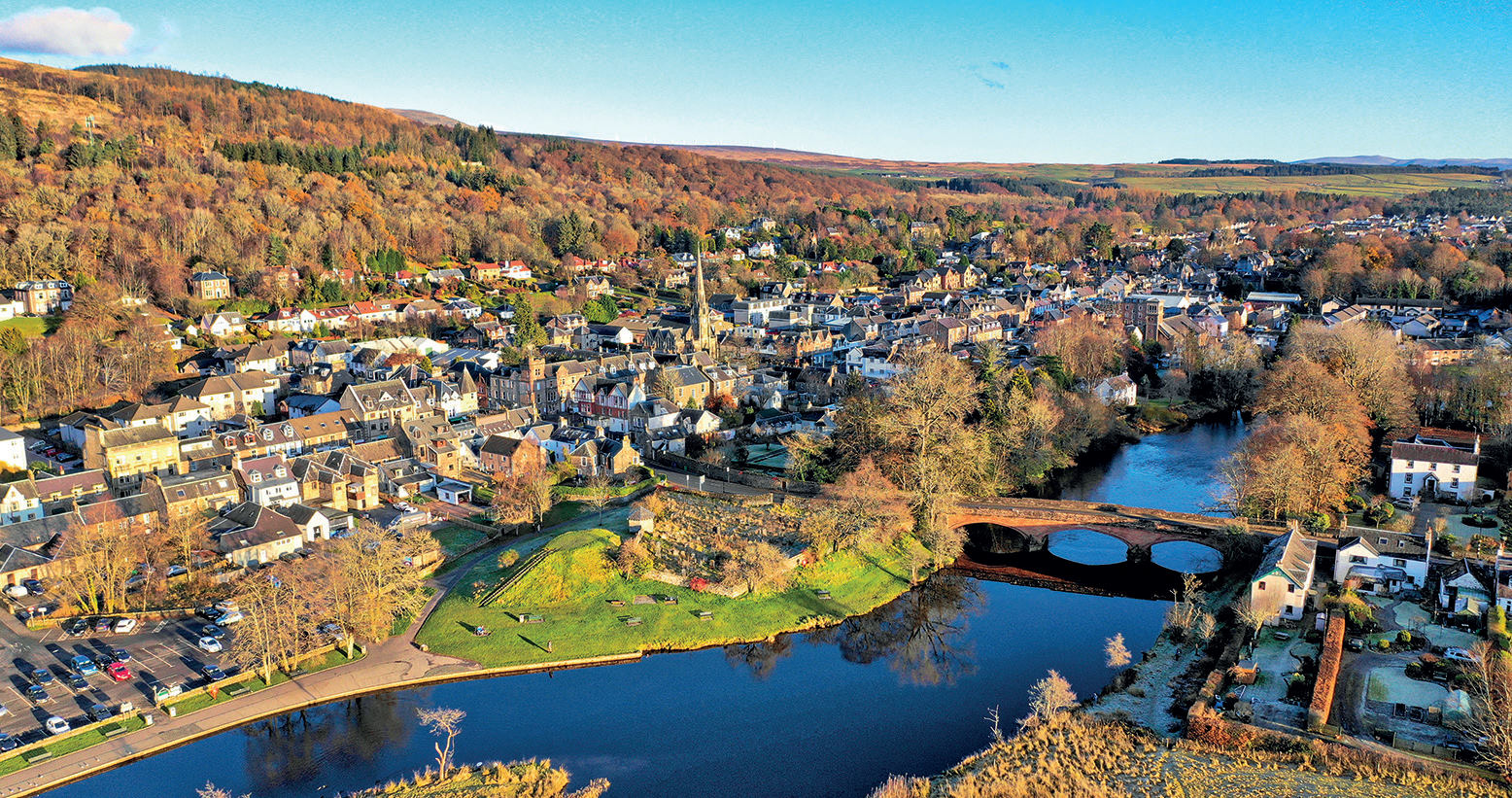 Regular Lochs and Glens guests will be familiar with the picturesque town of Callander, the subject of this edition’s cover photograph. It is known as the Gateway to the Highlands and for many visitors the ‘real’ Scotland starts here.

It was the more intrepid travellers of the late 18th century who first toured the area resulting in the publication of one of Scotland’s earliest tourist guides A Pamphlet Descriptive of the Neighbourhood of Callander by the local minister in 1790. However, it was twenty years later with the publication of The Lady of the Lake by Sir Walter Scott that placed the Trossachs very firmly on the tourist trail, and Callander became the focal point for the ever increasing numbers of visitors coming to see the area for themselves.

The arrival of the railway in 1858 replaced the uncomfortable and dusty horse drawn transport that had previously brought visitors to the town resulting in a huge boost to tourism and tourist related industries including construction of many of the buildings that we see today - as can be seen in the late 19th century photo below. 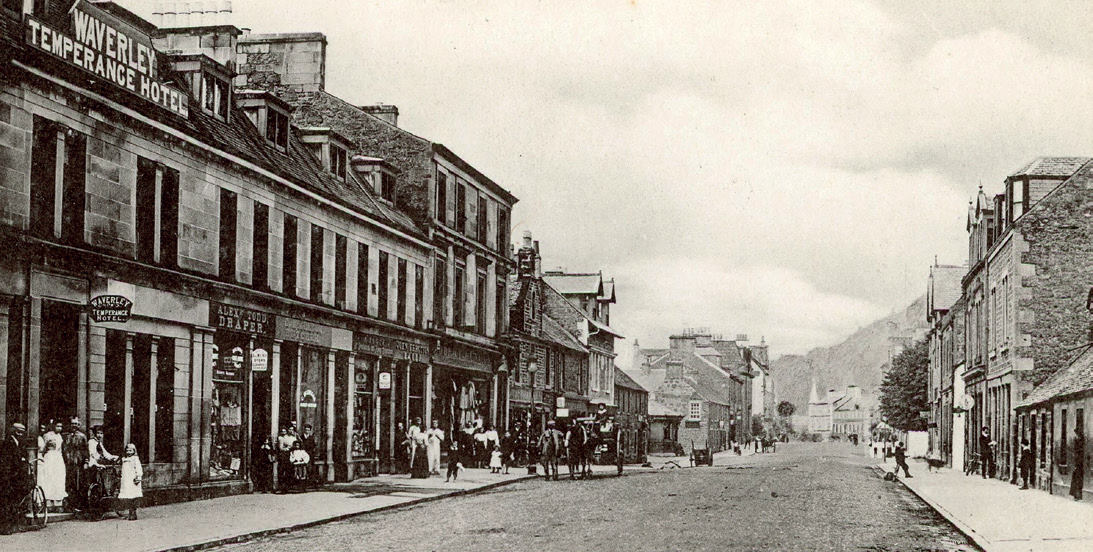 It is a unique early image of the High Street when photography was still such a novelty that the local inhabitants stand outside on the pavement so that their image can be captured in perpetuity. On the left of the photo is one of the many temperance hotels being constructed in tourist destinations at that time as they would have been the only choice for any respectable visitor. How times have changed.

Here at Lochs and Glens we are beginning to feel that things are finally getting back to normal, or perhaps in the current jargon, the ‘new’ normal. Visitor attractions have largely reopened and our hotels are busy.

Part of the appeal of the domestic coach holiday is undoubtedly avoiding the chaos and uncertainty of ferry and air travel, but an increasing number of guests, who are concerned about climate change, choose travel by coach as it is remarkably carbon efficient.

Finally I would like to share a rather special photo that was recently sent to me anonymously, without explanation other than a note in faint pencil on the reverse Loch Awe Hotel, August 1938. As I looked at the image I have to admit to feeling a little emotional, for two reasons, firstly, August 1938 is the month that I was born and secondly, the unfortunate animal draped around the neck of the lady on the right is almost a copy of one that my own mother used to wear. It was high fashion at the time and I thought it quite normal. Now I am not so sure! 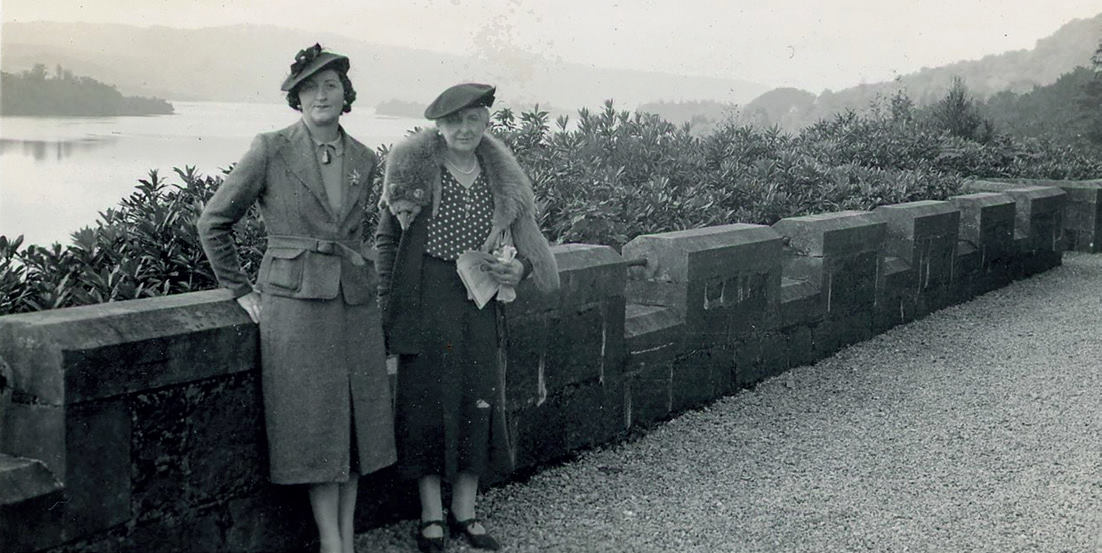 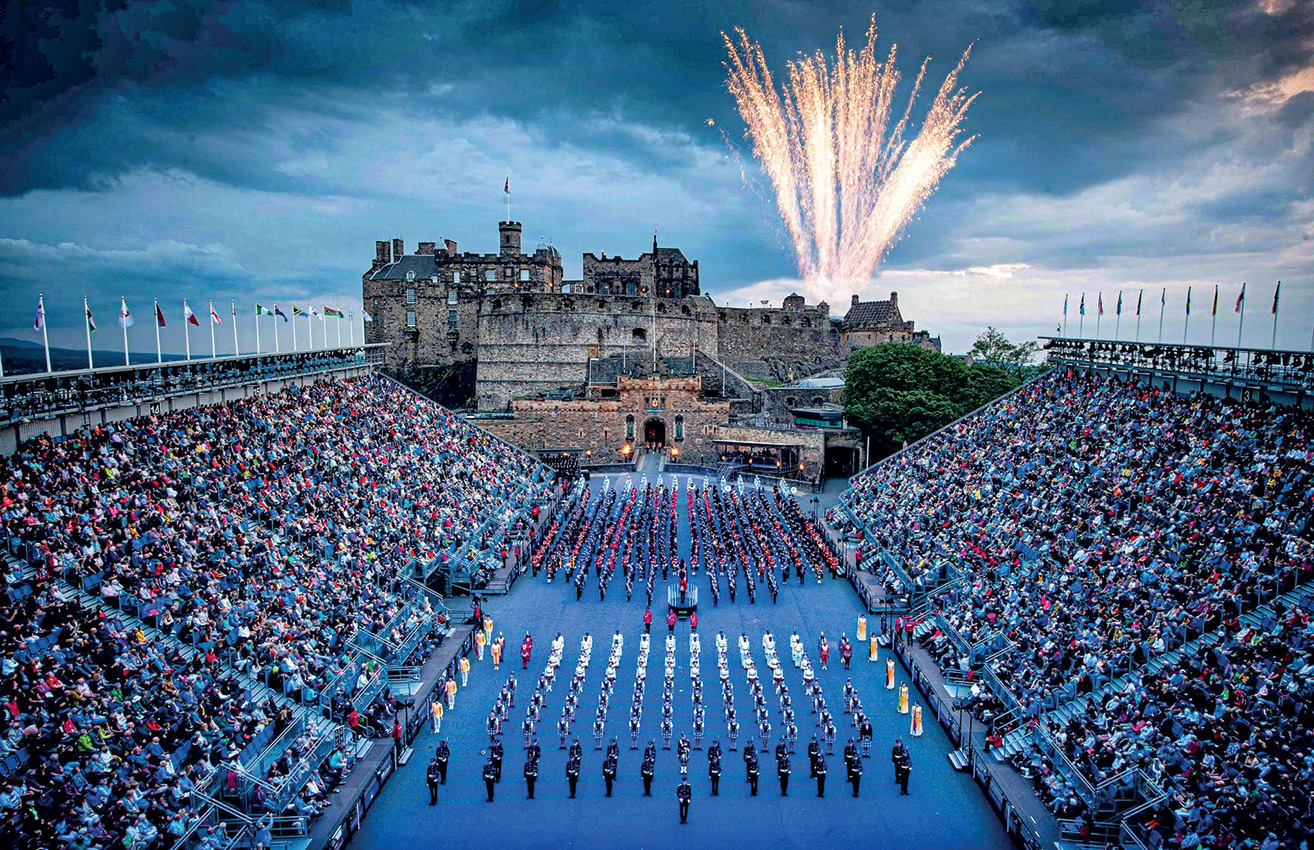 The first official Edinburgh Military Tattoo with just eight items in the programme was held in 1950 on the Edinburgh Castle esplanade, and during the course of that season it entertained some 6,000 visitors. Over the years the event steadily gained in popularity and reputation so that by the 2019 season, almost a quarter of a million people watched the multiple live performances together with a further 100 million who viewed television broadcasts of the event!

The Edinburgh Tattoo celebrates the skills and talents of military bands and display teams from throughout the world and audiences get into the spirit of the evening and cheer to the sounds of the military pipes and drums, clap to the Highland Dancers and watch in awe at some of the daredevil feats of accomplished motorcyclists or intricate marching formations. An essential component on the night is the rousing gathering of the Massed Pipes and Drums, among them The Royal Regiment of Scotland, and the Bands of Her Majesty’s Royal Marines. The show’s big bangs and fireworks display thunder across Edinburgh each night, particularly on Fridays and Saturdays when the Tattoo holds an extended fireworks display.

The good news is that the Tattoo returned after an absence of 2 years due to cancellations caused by the pandemic. It had been sorely missed as it is one of the highlights of the Edinburgh season. It had also been missed by our Lochs and Glens guests as the holidays that include a visit to the tattoo are invariably the first to sell out. During the 2023 season there will be opportunities to share the excitement and thrills of the event as holidays that include a visit to the tattoo are based at our Inversnaid, Ardgartan and Loch Tummel Hotels during the month of August.

Eilean Donan Castle is the ultimate Scottish icon and one of the most recognised castles in Scotland. It probably appears on more shortbread tins and calendars than any other, and is certainly one of the most popular visitor attractions in the Highlands.

The island’s original castle was built in the thirteenth century and became a stronghold of the Clan Mackenzie. However, in response to the Mackenzies’ involvement in the Jacobite Rebellion, three Royal Navy frigates were sent to deal with the uprising and in May 1719, three heavily armed warships moored a short distance off the castle and bombarded it with cannons following which Eilean Donan lay in silent ruin for the best part of two hundred years.

The castle that visitors enjoy today was reconstructed as a family home between 1912 and 1932 and incorporated much of the ruins from the 1719 destruction.

Tours of the Eilean Donan will be included in several Highland Hotel itineraries during 2023.

Readers’ Views - A selection of your letters and photos 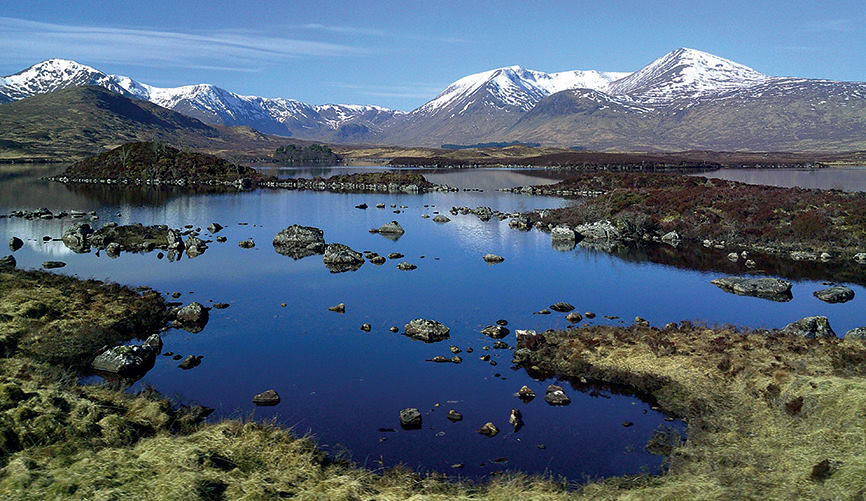 I thought I would share a photo taken during our latest L & G holiday at the Highland Hotel in Fort William in March 2022. Staff, food quality, rooms & cleanliness were all first class and I must give special praise to our driver John & relief driver Niall who were both exceptional professional. The photo was taken on the A82 from Tyndrum to Fort William which passes through Rannoch Moor & Glen Coe - The ULTIMATE ROAD TRIP. Looking forward to the next holiday in July at Ardgartan. Gordon Hadgett, Burton upon Trent. Staffordshire. 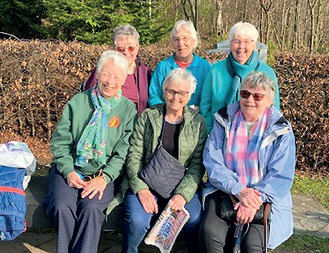 Looking forward to our next holiday Hi, we have just returned from our five day holiday to the Inversaid hotel and would like to say what a wonderful time we had! The hotel and staff were amazing and we didn’t even realise they were short staffed due to Covid until the lovely girl came on to the bus the morning we were going home to apologise to tell us! We enjoyed all the trips and our driver Chris was very informative and so friendly! We are looking forward to our next holiday with you in July and will certainly be booking again for next year!! Thank you. Margaret & Brian Thurston, Norwich

As Good as Ever After not having a holiday with Lochs and Glens for some time, we journeyed to the Ardgarten Hotel on the 20 January and have to say it was as good as ever. The hotel, food and entertainment were as good as we remembered if not better and it was an excellent relaxing holiday. There were a few people on the same coach who had never experienced Lochs and Glens before and were surprised how good they were and would certainly book again. We also will be looking forward to booking with you again. Thanks once again. Kathryn & Ian Marchbank, Pontefract 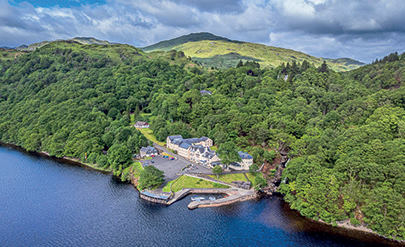 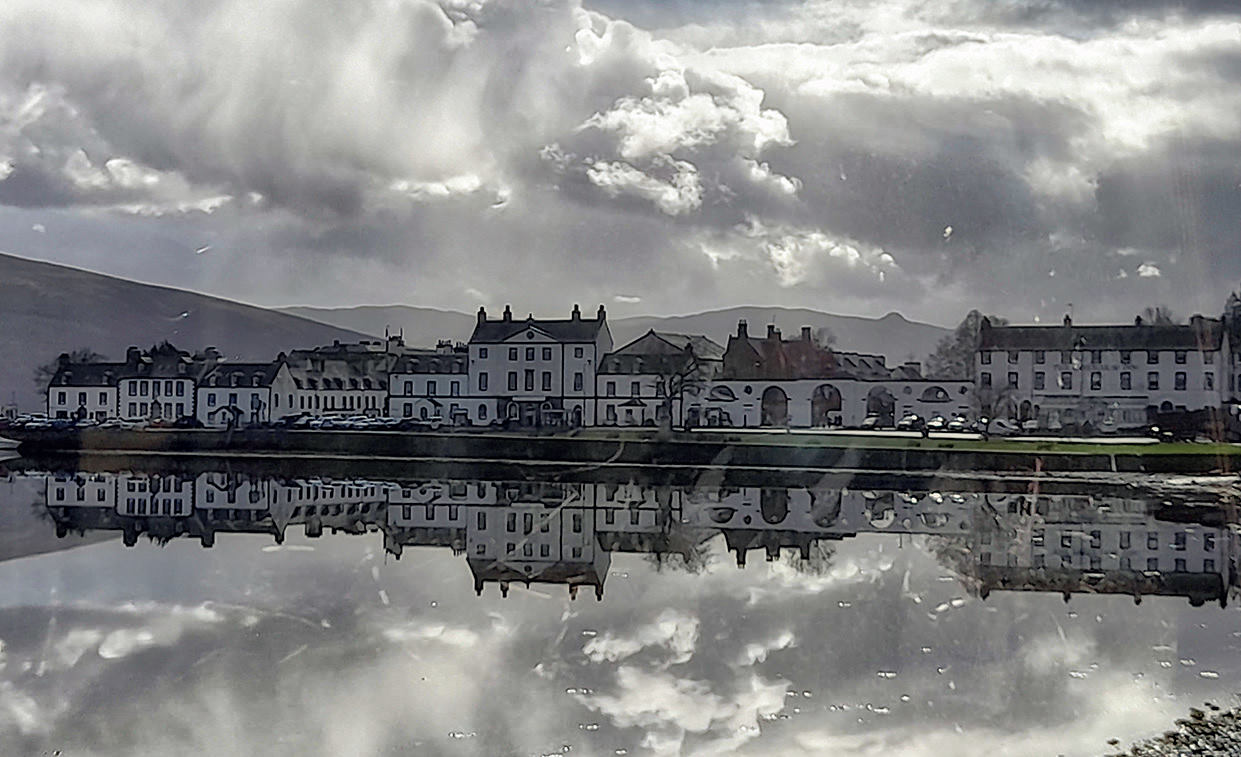 The return of the SS Sir Walter Scott 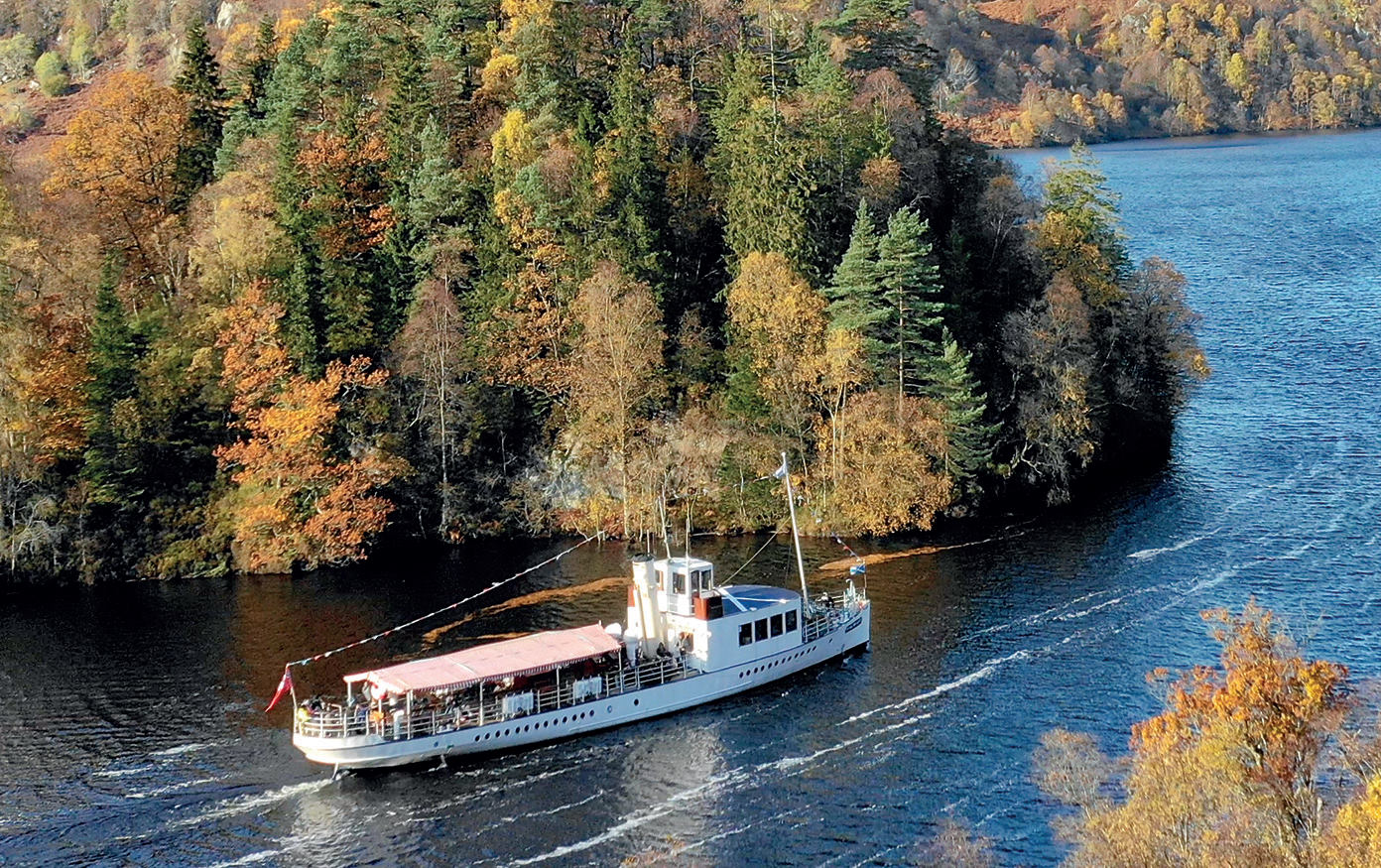 The SS Sir Walter Scott is Scotland’s oldest surviving passenger steamer - but has been out of service on Loch Katrine since 2020 after cracks were discovered in the ship’s boilers. But now there is a glimmer of hope. The vessel’s custodians, the Steamship Trust, say they’ve raised 450,000 of the £500,000 needed to complete the ship’s restoration and are now appealing for the public’s help in getting them over the line and returning the ship to service on the loch later this year. There is such an affection for this wonderful 122 year old lady that donations are arriving on a regular basis, but it is touch and go. However it is possible that some Lochs and Glens guests who will have sailed on her may wish to help; if so donations, no matter how big or small, can be made via the dedicated website

The history of pleasure craft on Loch Katrine is fascinating. The first vessel was a rowing galley named the Water Witch, which was manned by eight sturdy lads wearing the kilt, much to the delight of visitors. She reigned supreme until 1843, when the first steamer, The Gypsy, arrived resulting in acrimonious argument. However the Gypsy did not last long - she disappeared one night and the redundant oarsmen were suspected of scuttling her and were taken to court. They claimed it was the Water Bull of the loch that had always protected the galley but destroyed the steamship which it disliked by holing it with its horns. Their Gaelic dialect was beyond the court translator and caused such confusion that the case was thrown out with a verdict that ‘the boat was sunk by persons or things unknown’.

It was a short lived victory for the oarsmen as in 1845 a 30 ton paddle steamer, the Rob Roy was introduced onto the loch and became an immediate success. Demand continued to increase to the extent that a 90 ton replacement was commissioned and launched ten years later. This vessel, also called the Rob Roy was to continue in service for the next 45 years. 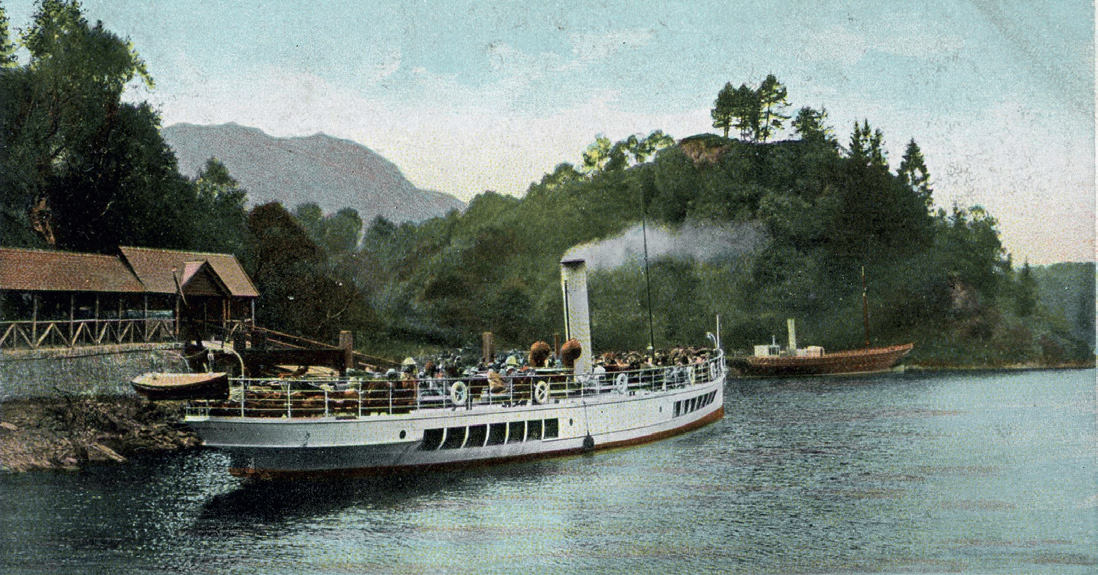 The Sir Walter Scott shortly before it was taken out of service. It had been significantly modified over the years including the provision of a wheelhouse.

As the 19th century came to a close, the arrival of the railway begun to have a dramatic effect on tourist numbers and it became clear that an even As it was when first launched. The retired SS Rob Roy in the background. larger vessel would be needed to cope with the volume of visitors that were now flocking to the area.

In 1898 two local hoteliers approached William Denny and Brothers at their shipyard in Dumbarton to commission a much more substantial vessel, one that could accommodate 300 passengers. It was to be named the Sir Walter Scott and a price of £2,241 was finally agreed. However, the delivery charge was to be almost as much again - another £2,028! The reason for such a substantial sum resulted from the difficulties involved in transporting such a large vessel to such a remote location.

The Sir Walter Scott was assembled using nuts and bolts at Denny’s shipyard at Dumbarton on the River Leven. Following satisfactory sea trials in 1899 the individual sections were numbered and the vessel dismantled. The pieces were then transported by barge up Loch Lomond to Inversnaid, then taken by horse-drawn carts to Stronachlachar Pier on Loch Katrine where the vessel was re-assembled, this time using rivets. The final touches were applied, the Rob Roy was retired, and the SS Sir Walter Scott commenced its long illustrious career in the spring of 1900.

Back to all Newsletters

M F Wells Hotels Limited t/a Lochs & Glens Holidays is an appointed representative of ITC Compliance Limited who are authorised and regulated by the Financial Conduct Authority (their firm reference is 313486) and which is permitted to advise on and arrange general insurance contracts.
All insurance prices include Insurance Premium Tax (IPT)